Quran on the moon landing--What are the odds?

Sura (Chapter) 54 of the Quran is THE ONLY chapter in the Quran titled “Al-Qamar” which means “The Moon”.

And now If we are to count all the remaining verses right after this specific verse right all the way to the end of the Quran, we will count exactly 1389 too! The year 1389 Hijri in the Muslim calendar corresponds exactly to the year 1969 AD in the Gregorian calendar, the year in which man landed on the moon for the very first time and ploughed the moon's surface of about 22 kg of moon soil. On July 20, 1969 ( 6th day of the 5th month of 1389 Hijri ), as part of Apollo 11 mission, astronauts Neil Armstrong and Buzz Aldrin landed on the Moon, and bring back to earth about 22 kg of moon soil.

It is very telling that the number of verses after the moon verse is exactly the year of the moon landing. This is quite interesting. July 1969 corresponds to the year 1389 (not 1390, don't make that mistake, the Hijri calendar is different, so the years are not 1:1, look it up for your own reference).

(One of the signs of the Day of Judgement. The Arabic uses the past tense, as if that Day were already here, to help the reader/listener imagine how it will be. Some traditional commentators hold the view that this describes an actual event at the time of the Prophet, but it clearly refers to the end of the world: cf. the same expression with reference to the sky, 55: 37; 84: 1.)

But non-withstanding what that verse actually means, let's ignore what the verse means--what are the odds that the number of verses after the first verse of the only chapter titled the moon would be 1389--the exact year humans land on the moon. The chances of this are very low. It seems like 99.9999999+% chance that it could have been literally any other number, but why was it this significant number?? It could've been any number, but it was this one, the one number that has direct significance to the first Apollo mission...Why did the quran have the number of verses it does and not more/less, why was that chapter conveniently placed in a spot such that there was exactly 1389 verses after it? What are the odds, it could have been any number, any number of verses could have existed etc etc!

What are the odds that the number of verses after the first verse of the only chapter titled the moon would be 1389--the exact year humans land on the moon. It could've been any non-significant number, but the number it happened to be was the most significant number to humans that would ever reference the moon.

There is even more!

However, there are 25 different time zones in the world, making the hour of the launch from the moon relative to the timezone you are in. The minutes and seconds of that departure though is constant throughout all time zones. So to be more precise, we left the moon at 54 minutes, 1 second past the hour.

[Quran 54:1] The hour has come closer and the moon has split. 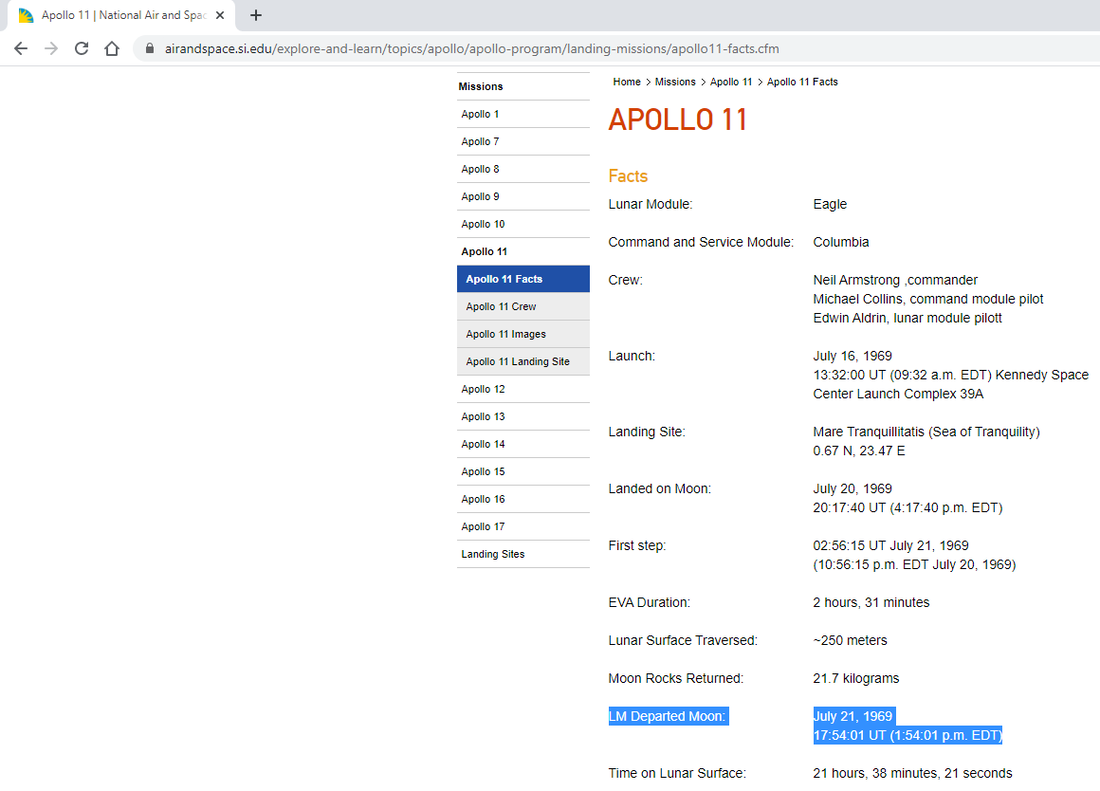 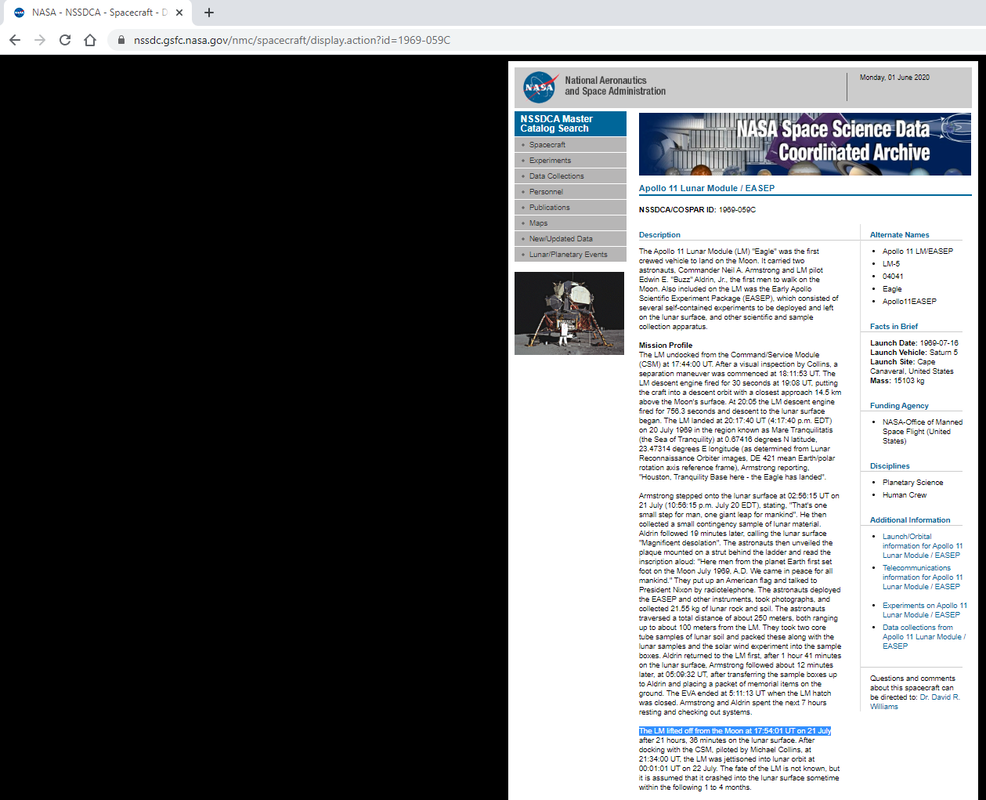 The EXACT MINUTE (and second) that part of the moon was split from the moon is 54 minutes:1 second which happens to be Quran chapter 54:1 the ONLY verse in the Quran talking about the splitting of the moon...

There is even more!

The number of Arabic letters in this verse (Quran 54:1) is 22 letters.

We just said that verse (Quran 54:1) has 22 letters in it. Also, the word "moon" in this verse is the 22nd time it occurs in the Quran (when you count the title of chapter 54--"the moon" which is another occurrence of the word "moon")

So what does that mean? That means the number 22 has dual significance when it comes to this verse and Apollo 11.

There were 22 kg of moon rock/soil collected.
The astronauts spent 22 hours on the moon's surface before they departed the moon and split a piece off from it 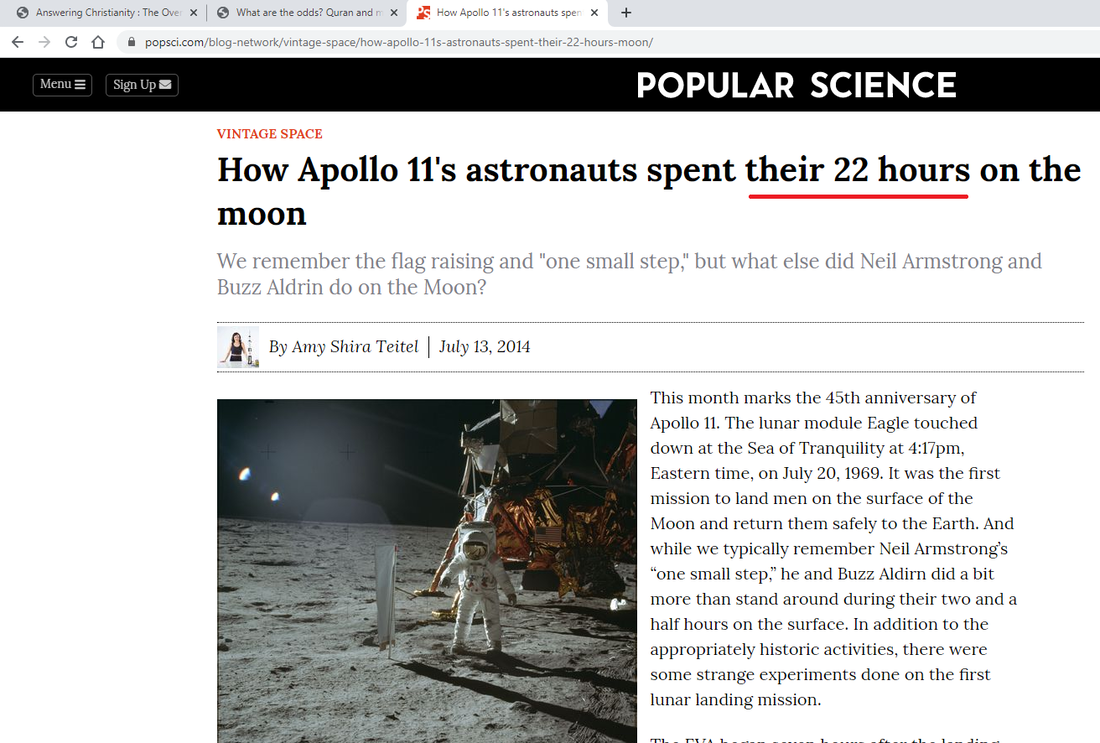 It is actually enough that we have the 1389 verses after it and the 54:1 seconds the LM departed the moon. That would've have been sufficient. But the Quran also gave us 22 kg and 22 hours on the moon. We did not need these 2.

(When you split something, it is not necessarily by one half. You can split something by a quarter, by a third, by two thirds etc. Saying something was split does not specify how much it was split. It could have been split in many different ways)

An important note about significant figures.

In science, there is a concept known as significant figures. That is when referring to a calculation, there is an appropriate way to describe it.

If I say that I weigh: Are any of the above statements incorrect? No! They are all correct. It just depends on how many digits I want to use--that is how many "significant figures" I decide to label things by.

Now scientists themselves do this! They round. When discussing things they round.

Did those sources above lie to you? I gave you a NASA source which said that the moon left at 54:01? Is that source wrong? Is NASA wrong? NO! That is just the significant figures they decided to use when discussing when the LM departed the moon. If you want to go into more detail, you can give more details, but using significant figures does not make you wrong. Saying it departed at 54:1 time is correct if you are only interested discussing when it departed at the level of the second not at the level of a mili-second. If I tell you I weigh 187.499 pounds and then I tell you I weight 187.5 pounds, I did not lie to you, it is still true, I just was only telling you how much I weigh to only 1 decimal point. I could've have told you how much I weigh to 12 decimal points, but I chose not to.

Likewise, the scientific article I mentioned above, it says that scientists collected 22 kg of moon rock. They collected 21.7 kg (or 21.55 kg). The article isn't wrong, it just chose not to go to the decimal point. It wanted to give you a whole number. The same idea with the time they spent on the moon (36 minutes is closer to +1 hour than -1 hour).

Note saying that Allah wouldn't round is anthropomorphizing God's psychology by inserting human psychology and your own psychology into your understanding of God. God does whatever he desires and it may be different from what we desire. Don't assume Allah's personality or what he would choose. We talked about the common error of anthropomorphizing many times throughout this website. Furthermore, Allah could understand that we could reason this. No simply rounded number is exact--for example, the LM could've departed the moon at exactly 54:00:50:58:41:12:47 and it could go on and on in specificity down to even beyond the nanosecond. But if you are going to choose to not go all the way down to beyond the nanosecond, you use less significant figures (less decimal places) and thus you must round in such a way to reflect the most accurate time of whatever significant figure you choose.
​
This is what the Quran did. There are 1389 verses after Quran 54:1. Quran 54:1 corresponds to the minute and the second (and ONLY the second, not the second AND the millisecond) that the LM departed the moon. 22 kg x2 corresponds to both the amount of moon rocks collected in kg and the amount of time we spent on the moon before we split it. 3 layers of significance! 3 Layers of improbability!

[Quran 41:53] We will show them Our signs in the horizons and within themselves until it becomes clear to them that it is the truth. But is it not sufficient concerning your Lord that He is, over all things, a Witness?

Here is the direct NASA source, published in 1969 (when Apollo 11 happened), saying "The total weight of the lunar material returned by Apollo 11 was 22 kg, of which 11 kg were rock fragments more than 1 em in diameter and 11 kg were smaller particulate material."

This is from NASA themselves at the time this happened:

Additionally: Inshaqqa (split) alqamar (the moon) could also mean reached the moon.  In Arabic we also say shaqqa tareeqah (walked his path).  This phrase is generally used when a man leaves his father's house, or even his town or country, and goes on to start and build his life (finishing his education, starting a new job, buying a new home, getting married, etc...).  We say he had shaqqa tareeqah (split off and went on his way).  So the Noble Verse could be talking about an event that happened in the past (ex: ancient moon quakes cracked the moon is a confirmed fact), and also will happen in the future by mankind flying and ascending to the path of the moon and reaching it based on the numbers' findings and matching above.  So

shaqqa = to walk his path.
inshaqqa = had been walked or reached; that the shaqqa task got completed.  It also means cracked and/or split.

​It is very clear to me that this specific finding in the Quran (54:1) is a major finding. This is a big deal.

The odds of there being exactly 1389 verses after this Quranic verse (which could indicate both reaching the moon and splitting the moon, as you demonstrated!!) is ridiculously low. Moreover, the odds this verse corresponds to when the LM first departed the moon (54:1) is very low. And even more, the fact that there are 22 letters in this verse and this verse marks the 22nd time the word "moon" is mentioned in the Quran corresponding to the 22 kg of moon material lifted from the moon is very interesting. That is 3 layers of improbability. This is a big deal!

This is a big deal. Of course, the disbelievers will handwave it as a coincidence. And the very next verse [Quran 54:2] also mentions this. This is unlikely to be a coincidence. There could have been any number of verses in the Quran--7,000, 8,000, and there could have been any number of verses after Quran 54:1. And this is the ONLY verse in the Quran mentioning the splitting/reaching of the moon and it happens to have 1389 verses after it (corresponding to the exact islamic year the moon landing happened) and this very verse talking about the splitting of the moon happened to be in chapter 54 verse 1 corresponding to the time the LM departed the moon. And this verse contains 22nd mention of the word "moon" (and the verse has 22 letters into it) corresponding to the kg of moon material extracted. This is unlikely to be a coincidence. Any disbelieving seeing this sign and continuously rejecting the authenticity of the Quran will surely have their punishment amplified. They will stand before the lord of the worlds and they will simply have no excuse. (and of course, the very next verses Quran 54:2-8 discuss exactly this--despite this sign, they will be disbelievers and in the end, they face severe consequences!). The Quran 54:2-8 is directly warning those who experience this miracle and informing them of what's to come. To repeat, the Quranic verses after 54:1 directly warn those who deny this sign given by Quran 54:1.
Powered by