Age of the Universe in the quran

The Quran asserts that the universe in its current form has been created in 6 periods (note that the Arabic word for "days" (yom) also means "periods" or "eons").

[Quran 7:54] Indeed, your Lord is Allah , who created the heavens and earth in six days...

The Quran also asserts that the Earth in its current form has been in existence for 2 periods:

The Quran makes it clear elsewhere that the periods discussed refer to the periods of existence:

[Quran 50:38] And indeed we created the heavens and the earth and all between them in six days

[Quran 41:10] And He placed on the earth firmly set mountains over its surface, and He blessed it and determined therein its sustenance in four days without distinction - for [the information] of those who ask.

Notice how the Quran used the word "and" rather than "then". This means these two statements are not successive events, but just a description of what Allah did. The verse states that Allah determined Earth's sustenance in 4 days. This may refer to the determination of the length of time set to establish Earth's provision (materials that contribute to the formation of the Earth to be in the right location at the right time as Allah determined--this took 4 days). See picture below: 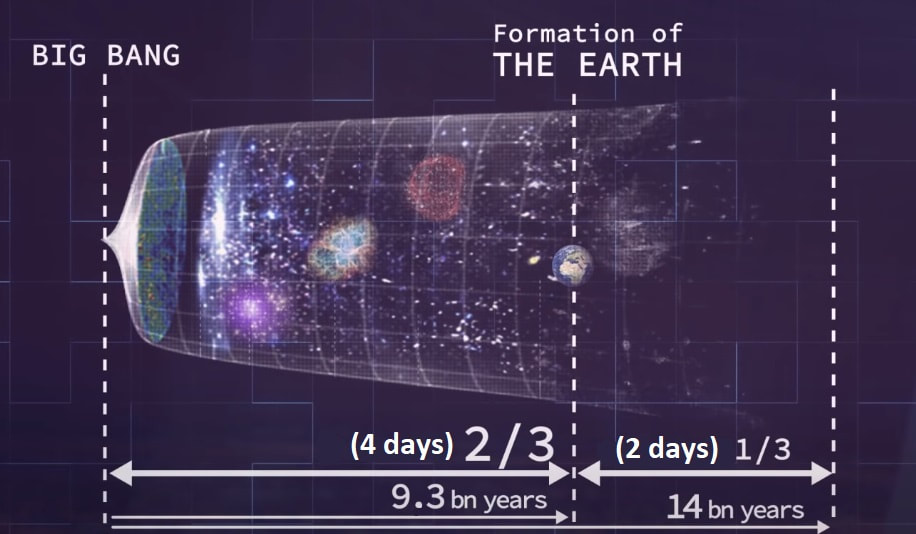 [Quran 41:11] Then He directed Himself to the heaven while it was smoke and said to it and to the earth, "Come, willingly or by compulsion." They said, "We have come willingly."

Now, the Quran uses the word "then" to indicate a successive event. That is: after Allah determined the provision of the Earth in 4 days, he made the Earth and the Heaven come together. This is also very interesting in its cosmological accuracy. The Earth formed through an accretion process whereby star dust collapsed in itself due to the force of gravity which led to the birth of our planet.

[Quran 2:29] It is He who created for you all of that which is in ("Fi") the earth. Then ("Thumma") He directed Himself to the heaven, [His being above all creation], and made them seven heavens, and He is Knowing of all things.

This verse is again very stunning in its careful accuracy. This verse said that Allah had created ALL that is IN the Earth THEN made the several heavens! Indeed all the matter on earth originated from the big bang before the universe grew to its size.

However, this verse is not as conclusive as the above verses. First, the word translated "then" is the Arabic word "thumma"-- it can be rendered "Moreover/Furthermore". The word "seven" in Arabic can also mean "several" not necessarily a number (7) and the word "heavens" may refer to only the proximal sky/atmosphere. Words often have multiple meanings in Arabic and as such this verse could be a reference to one of those meanings and another verse which uses the same word may be a reference to another meaning of the word depending on context. Also note the Quran does have some vague statements in it as well and their true interpretation may not be known to us (3:7).
Powered by